“Universe in a Bottle – Treasures of Snuff Bottles” Sale


Yu Jen Taipei will be presenting “Universe in a Bottle – Treasures of Snuff Bottles” auction on 25 December 2021 (preview 18-24 December.) The collection was exhibited at the National Museum of History in Taipei, Taiwan in 2008. Many of the bottles had been on the touring exhibition, also organized by National Museum of History, at seven museums across five countries from Europe to South Africa between 1991 and 1994. The miniature hand-held art-form attracted wide interest from collectors and visitors to the museums.

Exquisiteness and Elegance of Snuff Bottles
Snuff bottles were introduced by Western missionaries to China in the 17th century. The use of snuff and snuff bottles quickly spread through the ruling class and evolved into an art form with practical and aesthetic values. Collectors of snuff bottles focus on the five major qualities: authenticity, excellence, rarity, ingenuity, and miniature. Bottles often involve advanced art techniques such as carving, painting, calligraphy, ceramics, inlay etc. The quality reached its peak during Qianlong Period. Newer rare materials were also introduced in the making of snuff bottles, from the early glassware to jade, coral, rock crystal and zitan wood. 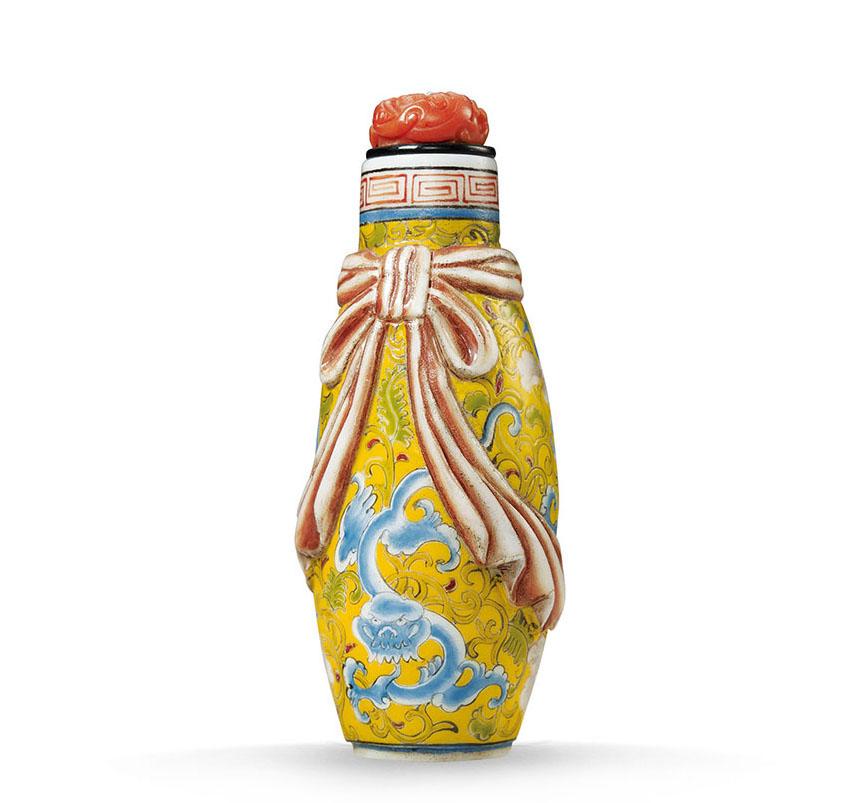 The Beginning of Rong Rui Tang Collection
Rong Rui Tang is a family-owned jewelry business which is now on its third generation. The second generation owner traveled extensively between Taiwan and the U.S. and developed interests in Qing Dynasty imperial works of art and started a collection centered around snuff bottles and jades from the Qing Dynasty. The interest soon spread through the whole family. What started as a pastime straightened the bonds of the now four-generation extended family.

Touring Exhibition at Major International Museums
Rong Rui Tang was invited to exhibit at the National Museum of History in Taipei in 1990 titled “The Jade Carving Art in the Ch'ing Dynasty”, featuring jade carvings including snuff bottles and jadeite, white jade, agate and other precious gemstones.

Following the exhibition, the National Museum of History organized a touring exhibition at museums across five countries from Europe to South Africa between 1991 and 1994 including National Museum of Natural History in Paris and Royal Museums of Fine Arts in Brussels , Museum of Far Eastern Antiquities in Stockholm etc.  During the tour, the owner of Rong Rui Tang also viewed the snuff bottle collection of these museums and in private hands. He was delighted to learn that what used to be the flaunted possessions of the Qing Dynasty dignitaries are also loved in the Western world as collectible art. 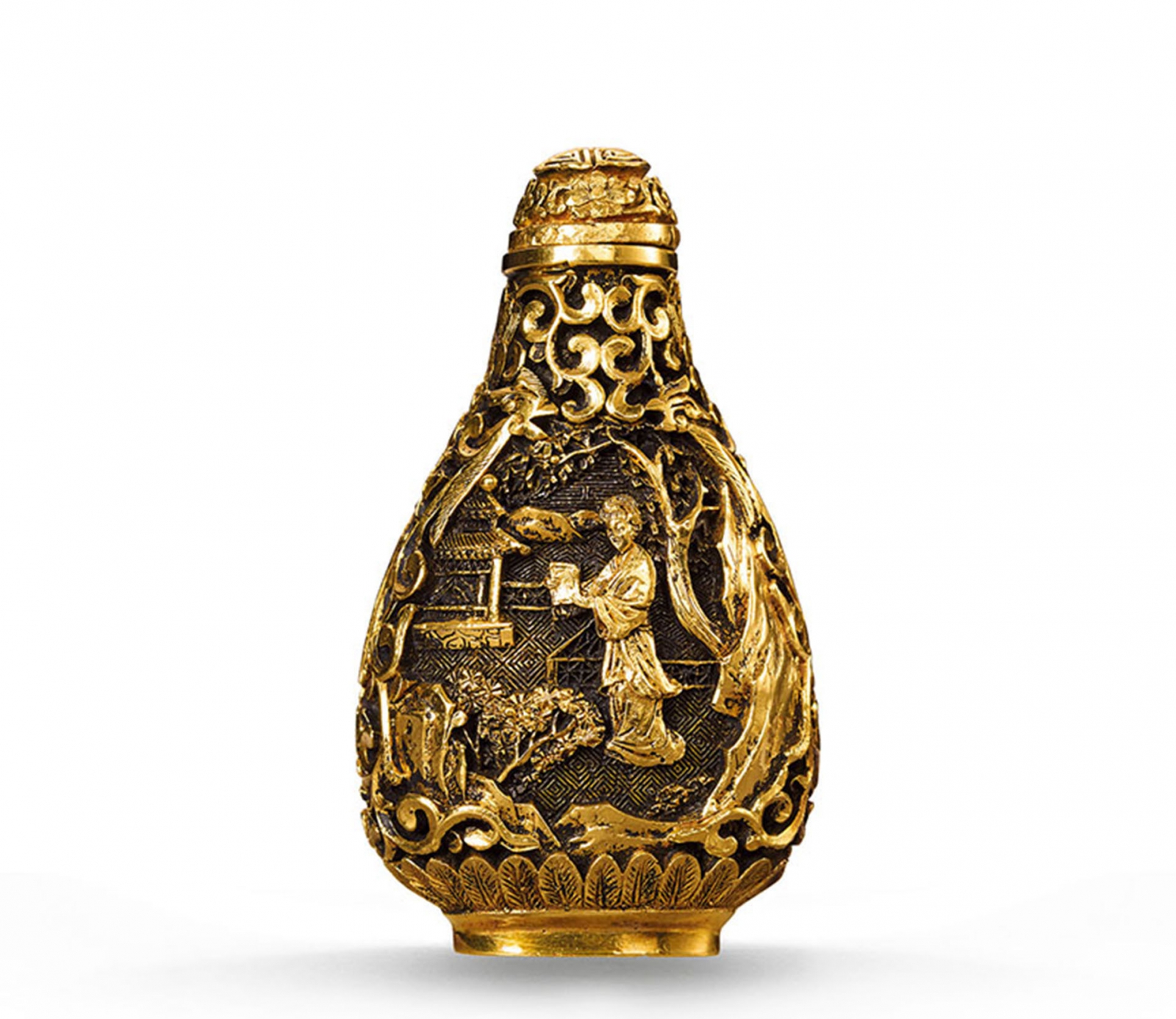 Snuff bottles encompass various art techniques on a small object. Western collectors have been collecting Chinese snuff bottles systematically since the 18th century. Since 1995, the owner of Rong Rui Tang would visit antique fairs and auctions during business trips to New York, collecting various types of snuff bottles, resulting in a rich collection over the years.

In 2008, the National Museum of History in Taipei again invited Rong Rui Tang for the “Universe in a Bottle – Treasures of Snuff Bottles” including nearly 200 pieces of snuff bottles categorized by materials: jade, inside-painted, glass, ceramics and enamel etc. The bottles demonstrated the wide variety of artistic connotation of the Qing Dynasty. 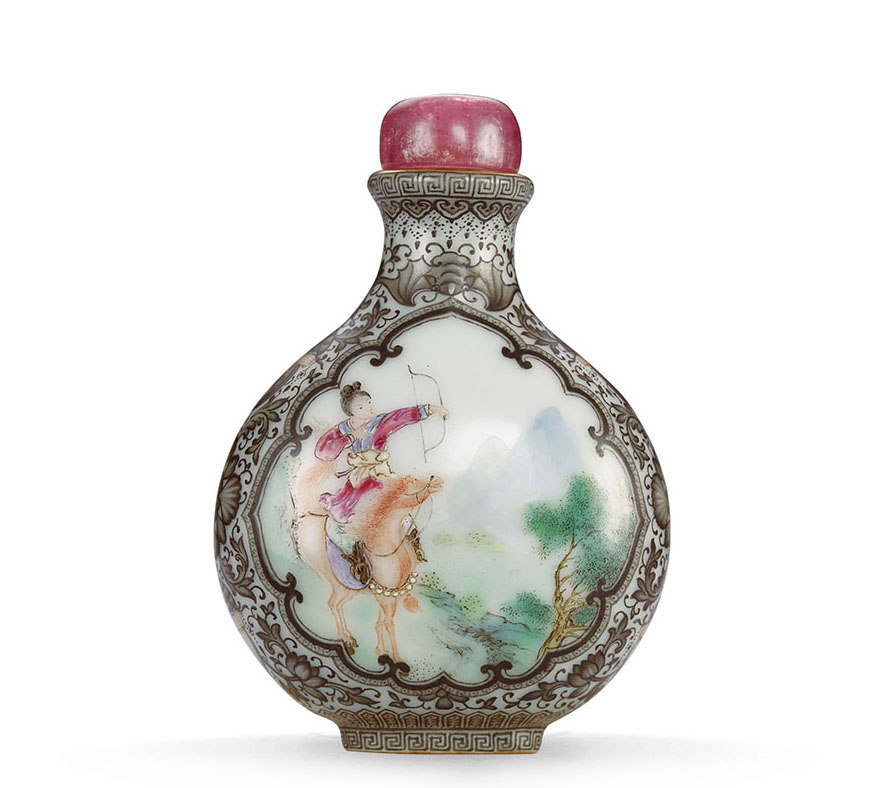 In the past 50 years the majority of snuff bottle collectors have been in the West with preference of glass, enamel and agate bottles. The Singaporean collectors like inside-painted bottles. The jades and enamels are Taiwanese collectors’ favorites.

Presenting in the Upcoming Autumn Auction
Rong Rui Tang’s collection includes snuff bottles with wide variety of materials and techniques. It has been over 10 years since the exhibition at the National Museum of History, Taipei and this year the 53rd Annual Convention of International Chinese Snuff Bottle Society will also be hosted in Taipei, with many activities moved online due to the pandemic. To connect Taiwanese art collection with collectors around the world, Yu Jen Taipei has been entrusted by Rong Rui Tang to present this “Universe in a Bottle – Treasures of Snuff Bottles” sale. We sincerely hope the collection will re-ignite the love of these wonderful tiny treasures among collectors everywhere!
Subscribe to our email newsletter
Share
share to mail
share to WeChat 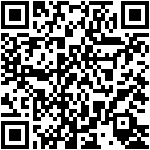